The purpose of these articles is to acquaint you with the new pull features of OnePager Express (OPX) and Pro (OPP)). There are eight (8) articles in this series, four (4) providing examples of the pull feature for OPX and four (4) for OPP. Please see the links at the end of this article to access the rest of the series.

We added the pull operation because we found that our users were often creating a project view, finding something in the source file that they needed to change, going back to the source file, making the change, and then re-launching OnePager to update the project view.

1) Let’s suppose you have a Microsoft Excel plan that you want to present to two different audiences – Your Project Management Office (PMO) and your customer. However, before the presentation you want to quickly examine the two project views made by OnePager side-by-side.

2) In preparation, you flag the rows to be shown to the PMO using Microsoft Excel’s Show It1 column and put a Yes in the appropriate rows. You also decide to use Show It2 to show those rows that you want to show in your presentation to the customer. You insert both the Show It1 and Show It2 columns into the plan as shown below:

3) For the sake of this example, let’s first use the OnePager Express desktop application to access the Microsoft Excel plan using the Show It1 flag column shown above.

4) After the steps covered in the article above are completed, OnePager will generate a project view with the title shown below, using the Show It1 column, and designating the snapshot with the date shown. The resulting project view will look like the following: 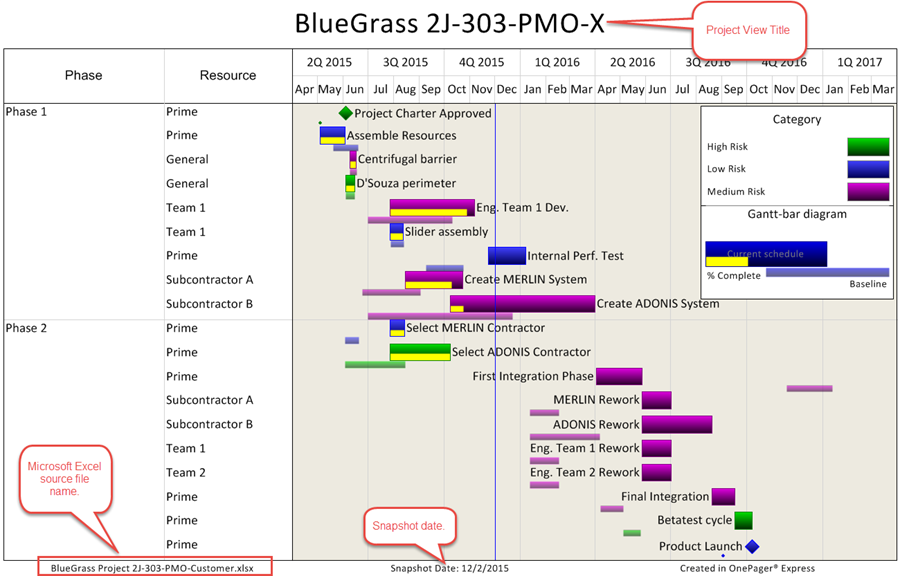 7) There are two ways of creating the second project view from the same Microsoft Excel source file:

(1) After saving the first project view, close the OPX desktop application and repeat the above process by opening the second project view and then using Show It2 to select the tasks.

(2) Remain in the current OPX PVE window and create a second new project view from there. 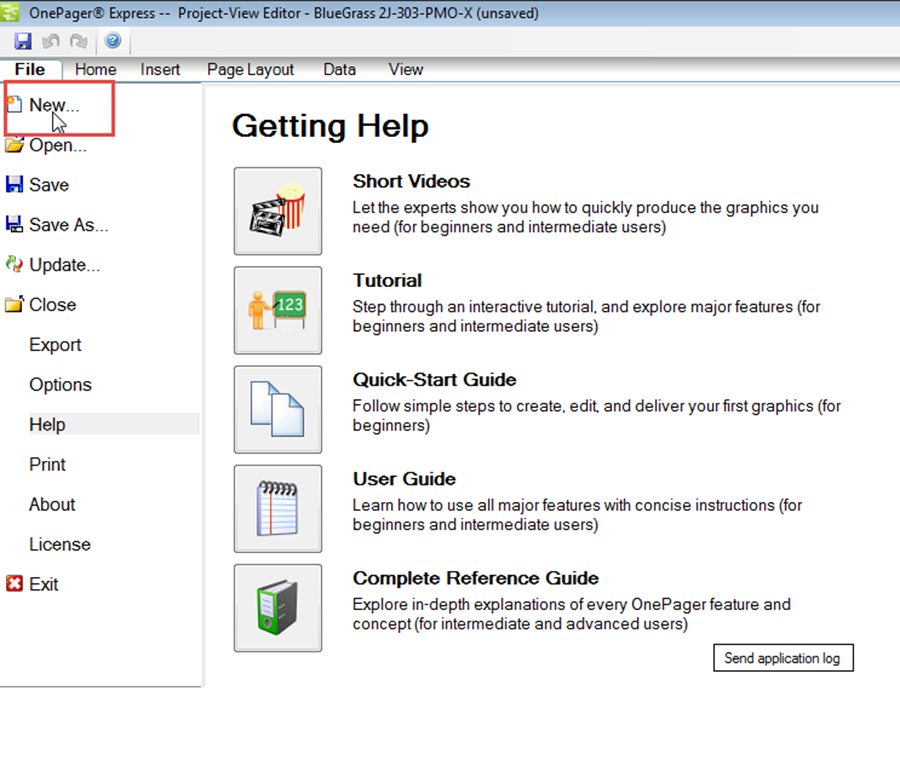 10) When you click the New… button as shown above, OnePager will display the OnePager choices (OPC) form. You will now use to create the project view for the customer by giving the new project view a new name, specifying that the “flag” column to be used is “Show It2”, and specifying the appropriate snapshot date as shown in the sequence below: 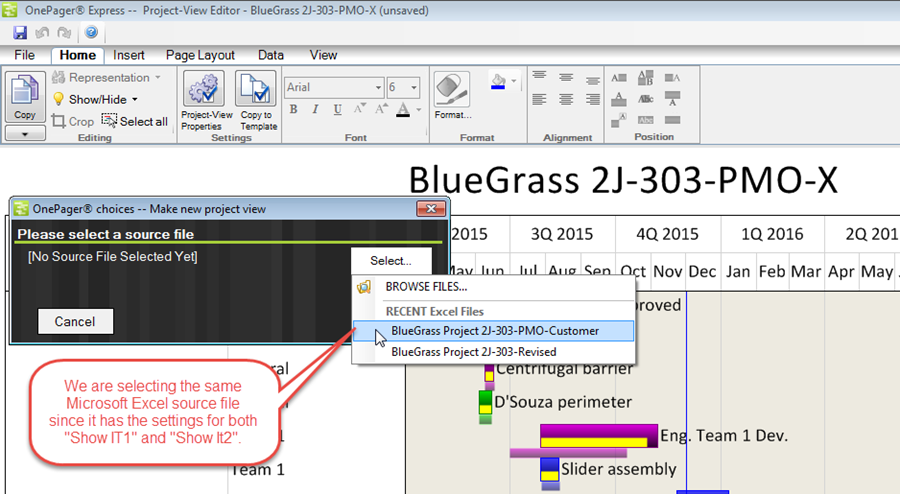 11) When the file is selected, the OPC form will expand and provide you with the ability to uniquely name the new project view, specify the flag field to use, and specify the snapshot date as we have done in the illustration below: 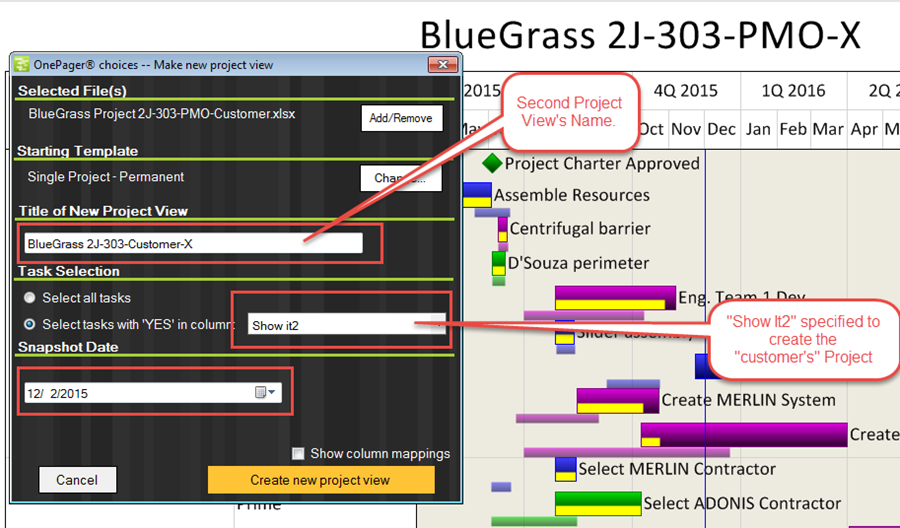 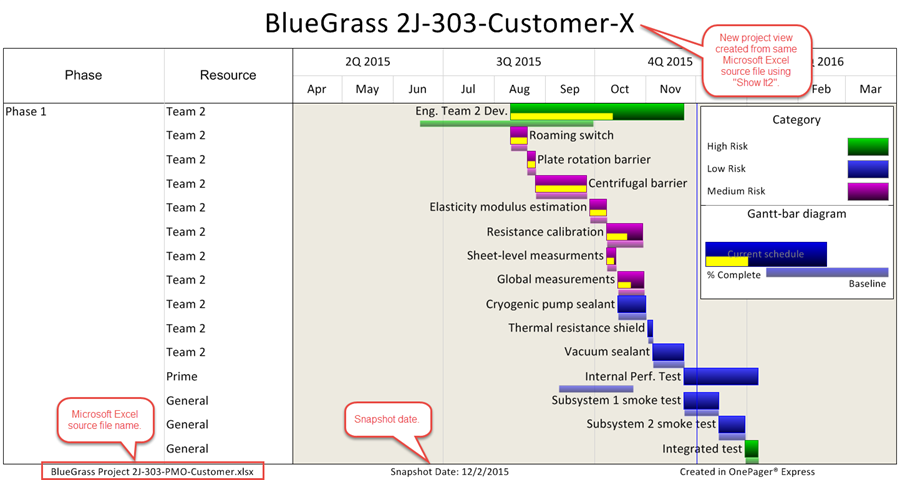 13) In this example, we used the OPX desktop application to create two project views from the same Microsoft Excel source file but using different flag columns. Now that the second project view is created, we recommend that it too be saved for future access.

14) Once you are satisfied with your project views you may save them, copy them into PowerPoint presentations, or share time in other ways.