About Where's My Stuff?! 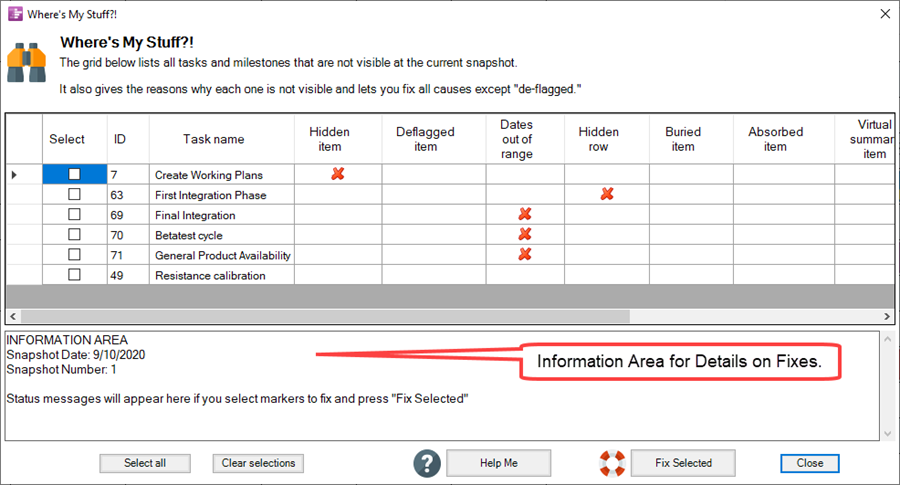 Why a Task Bar/Milestone Symbol is not Visible

If you need additional explanation on what the different reasons mean, you can click the Help Me button. This accesses the form below which gives a detailed explanation for each reason: 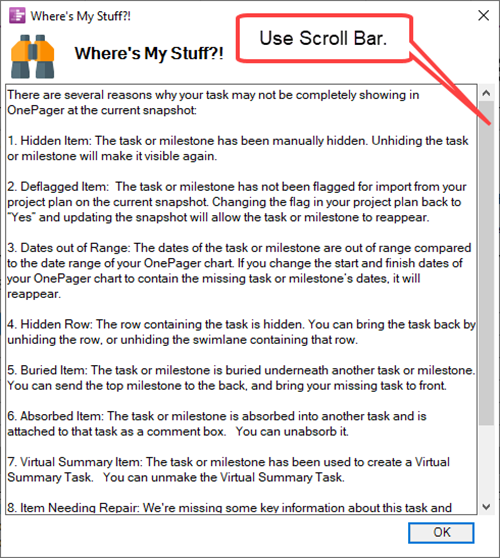 Using the information (X’s in rows) in the Where’s My Stuff?! form, you first know why the various items (rows, task bars, or milestone symbols) are not showing. You have two (2) options:

The process for having OnePager perform the fix is as follows:

1) In the Where's My Stuff?! form, check the checkbox ON (on the left of each grid row) for each hidden item that you want OnePager to fix.

2) You have the option also to select all grid rows in the Where’s My Stuff?! form by clicking the Select all button or you can click the Clear selections button to unselect all previously selected actions.

3) When your selections are complete, click the Fix Selected button and OnePager makes the selected items visible. Additionally, OnePager provides a list of the actions taken in the INFORMATION AREA of the Where’s My Stuff?! form as shown above.

As an example, suppose we select the top four rows in the Where's My Stuff?! form to be fixed as shown below: 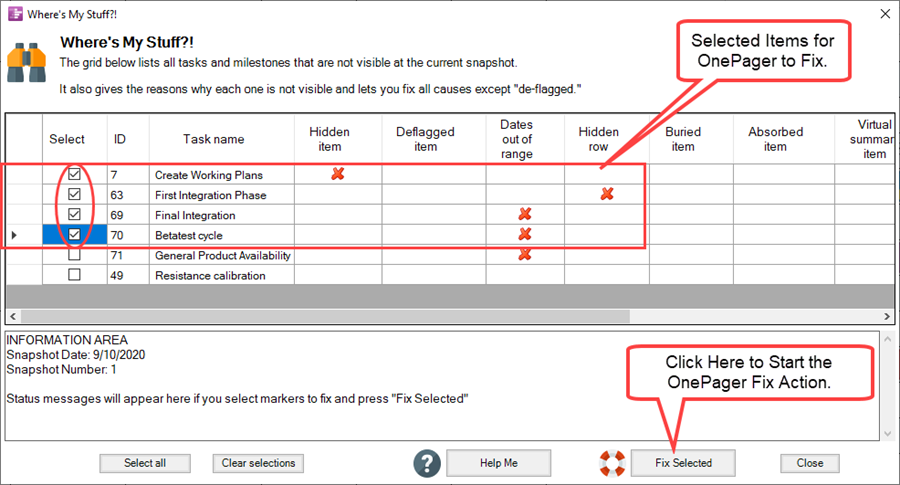 When the Fix Selected button is clicked, the Where’s My Stuff?! form responds as shown below: 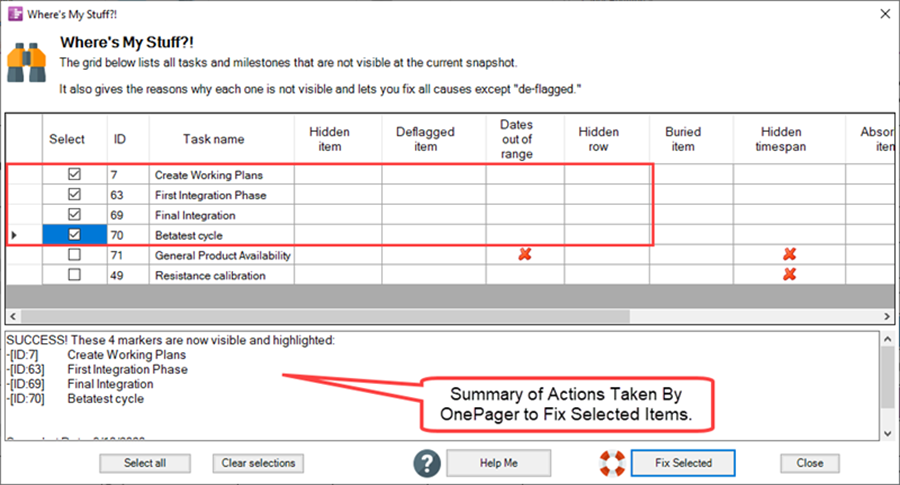 Upon performing the fix action described above, the chart is updated to reflect the changes made. The changes made by clicking the Fix Selected button as described above are subject to the Undo/Redo functions using the available active buttons on the OnePager ribbon tool bar.

The columns in the form can be rearranged left to right by left clicking the column header and dragging it to the left or right. This feature is quite convenient for grouping form columns together for the purpose of identifying and fixing issues. The column positions after dragging and dropping are not permanent. Below is a sequence of illustrations showing first the original arrangement of columns and second the column positions after the Hidden row column is moved all the way to the left:

Before Dragging Hidden Row Column to the Left Most Position 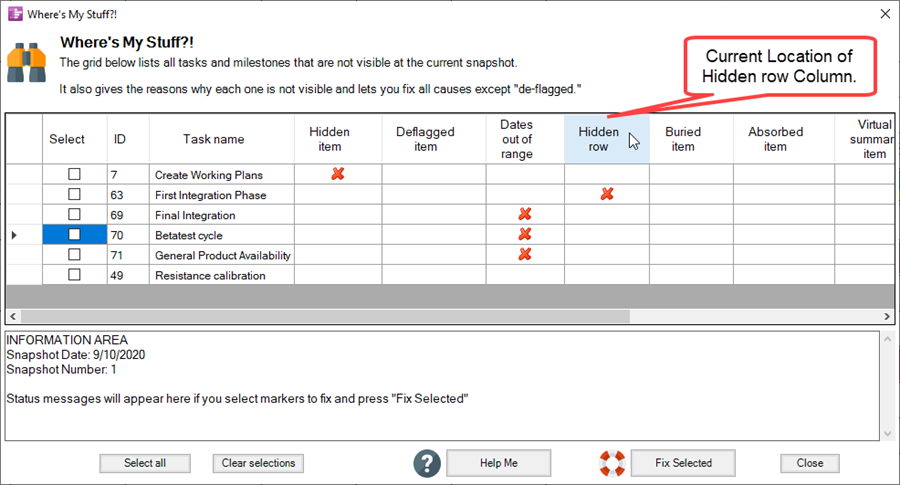 After Dragging Hidden Row Column to the Left Most Position 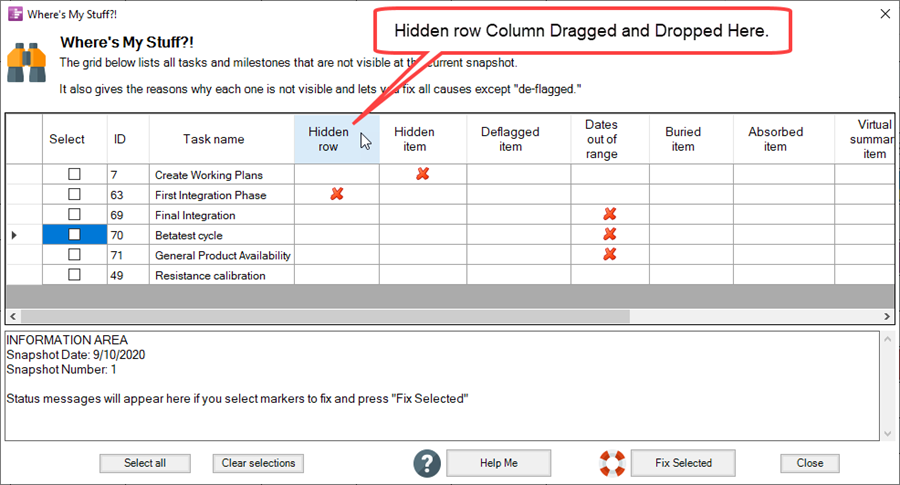 Before Sorting the Task Name Column 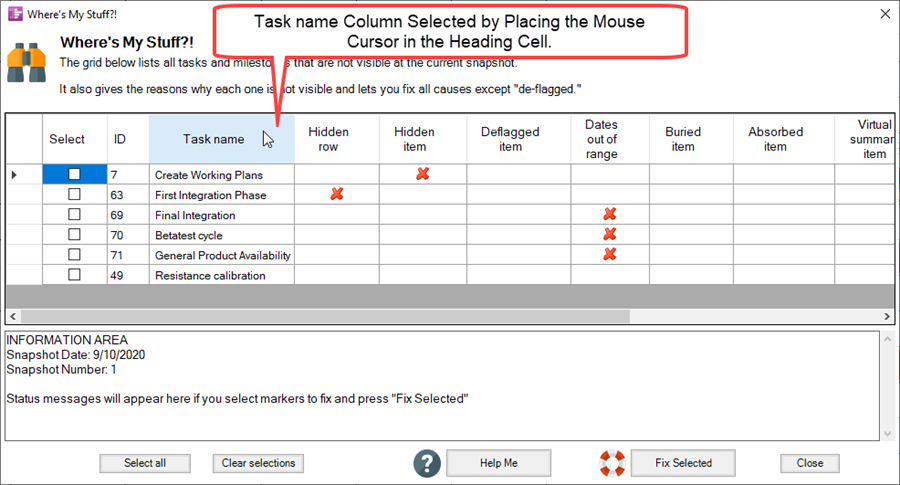 After Sorting the Task Name Column 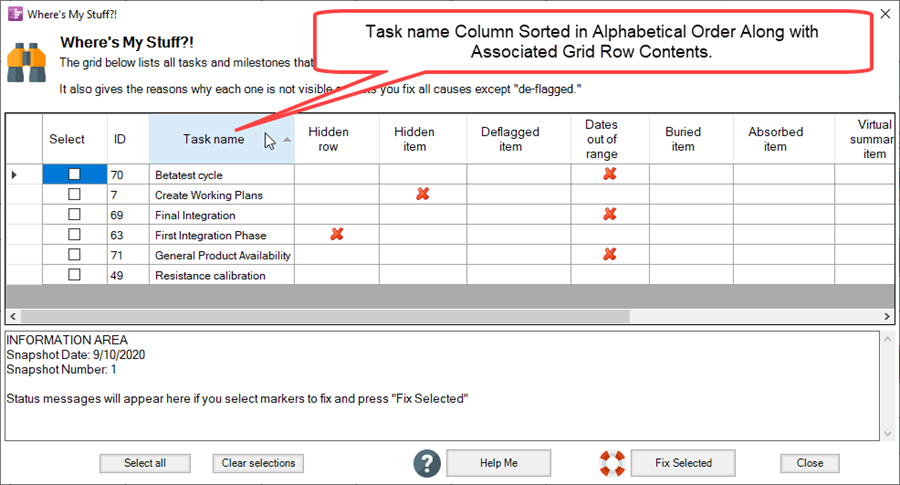 Selecting any of the column headers with X's using the cursor and left-clicking in the column's header groups the X's at either the top or the bottom of the grid and rearranges the data in the associated grid row accordingly.

If need be, you can widen any column in the form by placing the cursor on the edge of the column header cell and using the double arrow cursor to drag the column header's edge to the left or right as shown here: 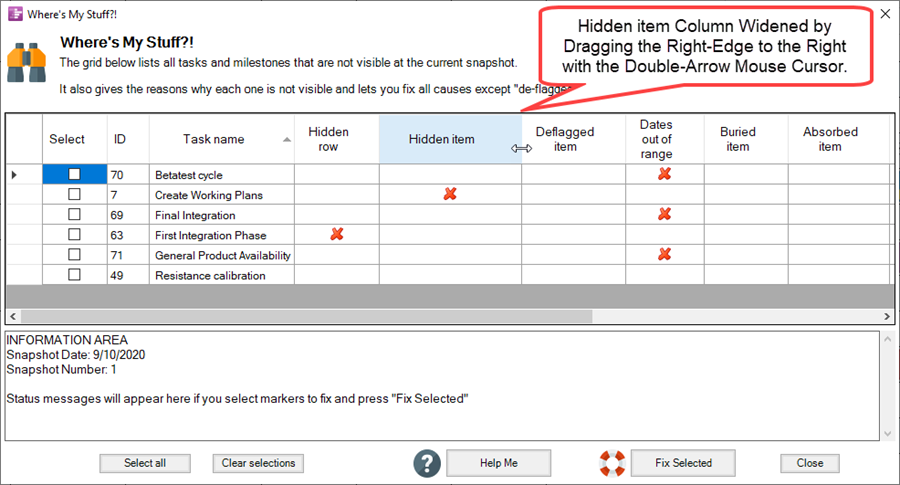 The Select, ID and Task name columns are frozen so that they do not scroll out of view when you are scrolling left or right via the horizontal scroll bar in the grid as shown below: 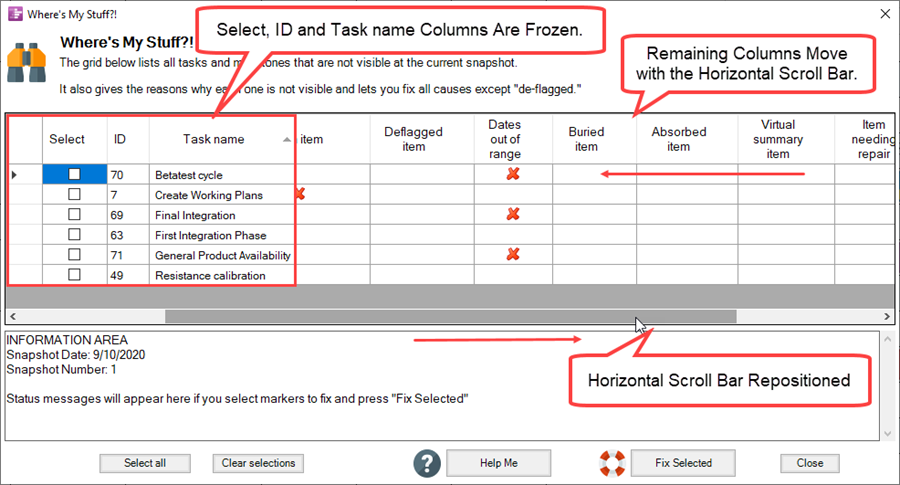 Hiding and Unhiding Rows and Swimlanes

Absorbing one task into another

Using the Where Are My Links? Form for OnePager Pro

Using the Where Are My Links? Form for OnePager Express