Merging the Wrong Tasks into a Project View for Version 6.1 - OnePager Pro

About Merging the Wrong Tasks into a Project View

1) As we explained, OnePager Pro (OPP) can consistently create snapshots from period to period with updated information from a Microsoft Project source plan. The tasks that are presented to OnePager in UPDATE mode should be the same set of tasks with, perhaps, some added or removed as the project moves toward completion.

b) When this happens, the best idea is to immediately press the Undo button above the OnePager ribbon. This action immediately restores the project view to how it was before all the unfamiliar tasks were merged.

c) Or you can simply close the messed up project view without saving it. When you reopen it, the erroneous update is gone.

3) To avoid this problem in the first place, you can be warned before the wrong tasks are imported into the project view. To receive this warning, there is a checkbox in the Project-View Properties (PVP) form at the Advanced tab that when checked assures that the Warning message discussed below and the fix option provided with OnePager is provided to assist you. See the article at: Advanced Tab for OnePager Pro in the Warn of merging tasks section for details on turning on the warning message.)

This warning and fix processes are described below:

1) The Advanced tab of the PVP form has a checkbox titled Warn of merging tasks. This checkbox is accompanied by the Warning options button to the right.

2) When this checkbox is checked, the button is active and when clicked it brings up the Set warning thresholds form wherein you can set the percentage of extra and missing tasks necessary to provide you with the Warning message discussed below. See the article at: Advanced Tab for OnePager Pro in the Warn of merging tasks section for details on turning on the Warning message.) 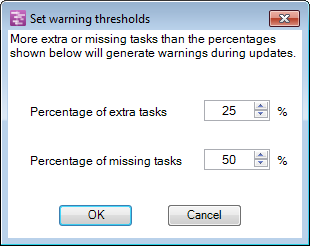 a) Setting these percentages to 100% has the impact of turning the fixes and warnings off.

b) Setting the percentages to 0% provides an assurance that any extra or missing tasks triggers the fixes and warnings.

4) After making the calculation, OnePager shows a Warning form asking if you want to proceed with the update, cancel the update, or try to fix tasks that have been misidentified.

5) The Warning message also gives you access to the See Extra and Missing Tasks form, shown below, so you can actually see the extra and missing tasks and make a fix, if possible.

7) At this point you have three options:

(1) Click the Continue import button to proceed with the import. By doing so you are accepting the differences between the current project view and the imported data that are about to update the project view. This can lead to both new rows and blank rows in the snapshot.

(2) Click the See and fix it button to take a look at the specific extra and missing tasks before deciding to whether to continue or not. You can sometimes also fix the issue if you notice that an extra task is actually a missing task in disguise. In that case, you can tell OnePager to map a missing task to the extra task. These actions are explained in the See Extra and Missing Tasks form discussed below.

(3) As the final option, you can click the Cancel import button to close the message form above and stop the import process.

Continuing to Import Regardless of Extra or Missing Tasks

8) Clicking the Continue import button tells OnePager to proceed with the import and disregard any differences between the set of current tasks in the project view and the set of selected tasks in the source plan being imported.

a) At the end of the import operation, you have an updated snapshot that was either added to the snapshot list or replaced.

b) You can expect to see some new rows containing the extra tasks and some empty rows corresponding to the missing tasks.

c) The latter can be automatically hidden if you have chosen the option Hide newly-empty rows on import on the Advanced tab page of the Project-View Properties (PVP) form. See section in this article: Hiding Empty Rows for more information.)

9) Clicking the See and fix it button shows you the See Extra and Missing Tasks form that lists the extra and missing tasks in two grids as shown below.

a) Usually a missing task is just an existing task in the project view that is not in the current import set because you decided you did not want to flag it for import.

b) Likewise, an extra task is usually just a task in the import set that you had not flagged previously but now want to include.

c) In these cases, there’s nothing to worry about, and you can safely ignore the rest of the discussion below.

d) There’s also the case in which you have accidentally started an update using the wrong source plan or the wrong flag field. To continue would give you a big, unpleasant surprise: lots of tasks that have lost all of their formatting. If the See Extra and Missing Tasks shows lots of extra and missing tasks that don’t seem to belong together in the same project view, you probably need to cancel the update so that you can go back and choose the correct tasks for doing the update

10) However, there are cases in which an extra task is actually a missing task that has been misidentified because its ID has changed in the source plan between when the project view was first created and the current moment when source plan data are being used to make the update.

a) When this happens you are able to recognize the missing task that is really just the extra task with a different ID.

b) In this situation, you almost always want the extra task to inherit all the properties of the missing task so that it retains the right formatting (color, shape, row assignment, and so on).

c) You can do this by mapping these two tasks to each other. If you see an extra task and then find a missing task that you recognize to be the same task but with a different ID, use the Map button in the form below to map the extra task to its corresponding missing task. 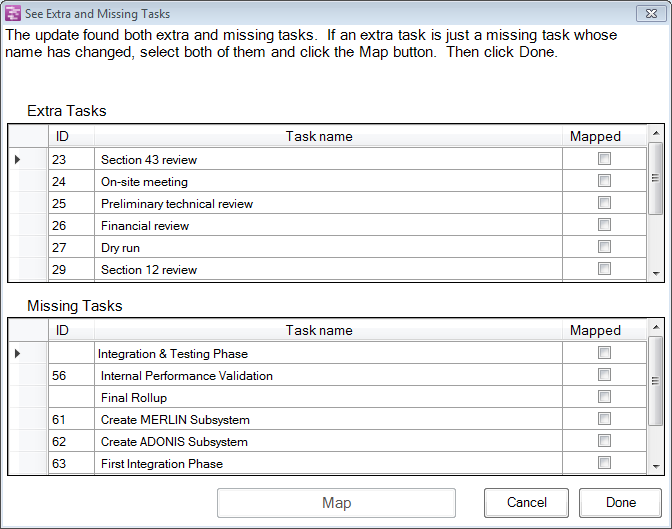 11) The form above has two grids (Extra Tasks and Missing Tasks), each of which has four columns. The left-most column is a row header for selecting a row. The ID column contains the unique identifier for the extra or missing task, and the Task name column contains its name. The right-most column displays check marks for both members of a mapped pair.

a) To map an extra task to the missing task that goes with it, follow these steps:

i) Use your mouse to select one task from the Extra Tasks grid by clicking the extra task’s row header.
ii) Then go to the Missing Tasks grid and click the row header of the missing task that goes with extra task.
iii) Once two rows are selected, the Map button is enabled. Click the Map button to map the two tasks to each other. Notice that check marks now appear in the Mapped column for both rows.
iv) Also notice that the name of the button changes from Map to Unmap, indicating that you can change your mind and remove the mapping you just created.
v) You can repeat the procedure above as many times as needed provided there are pairs of tasks available in the Extra Tasks grid and Missing Tasks grid. After matching a pair and clicking the Map button, when you select the second task in the next pair notice that the button labeled Unmap is relabeled to Map thus enabling the mapping function once more.
vi) To review all your mappings, select any mapped task in either grid. Notice that its paired task in the other grid has been automatically selected and that the Unmap button is now enabled. This lets you see what is mapped to what and to remove mappings that should not be there
vii) When you are satisfied with all the mappings between extra and missing tasks, associated missing tasks, click the Done button to confirm and go back to the Warning form where we started this discussion.

b) When you have finished this matching process and have returned to the Warning form, you can click one of the three buttons as described below:

12) During an import and update, OnePager can find extra tasks and no missing tasks. Or it can find missing tasks and no extra tasks. In such situations, the Warning message isstill displayed and the option to click the See and fix it button is still available. However, there is no way to fix anything because one of grids is empty.

13) When you view the See Extra and Missing Tasks form in such situations, it shows you the extra or missing tasks, but it does not instruct you to map anything. In this case, the form is for informational purposes only. 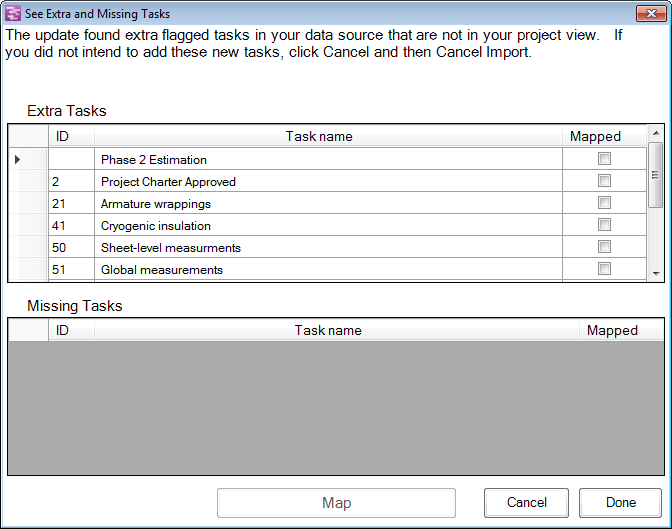