REPLACING a Snapshot via Pull Operation - OnePager Express for Version 6.1

2) There are eight (8) articles in this series, four (4) providing examples of the pull feature for OPP and four (4) for OPX

3) Please see the links at the end of this article to access the rest of the series.

3) The pull update lets you open a project view and update it repeatedly as you edit its source plan. After each set of changes to the source plan, you can quickly see the effect on the screen by using OnePager’s new Data tab to pull the source plan changes into the project view.

4) The example below illustrates a pull operation when replacing a snapshot.

4) First, update the Microsoft Excel source plan with the updated data you want to replace in the snapshot.

5) Launch OPX from the desktop and when the OnePager Express Start form appears click the OPEN button which, in our example, provides a dropdown menu with the name of the project view you wish to update by replacement. In this case it’s BlueGrass 2J-303-PMO-X as shown below: 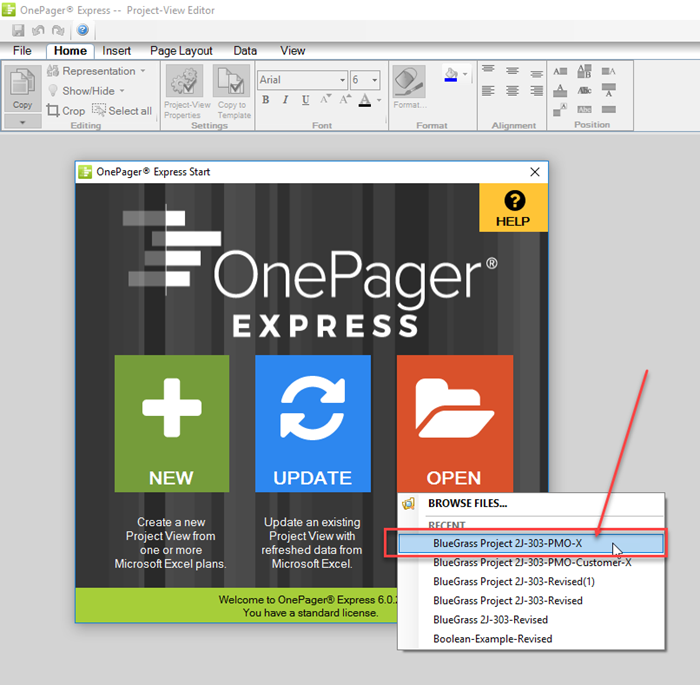 6) The OPX desktop application accesses the selected project view up in the Project View Editor (PVE) window. This is the project view and snapshot we want to replace. To proceed with the replacement click the Data tab on the ribbon. The PVE looks like this: 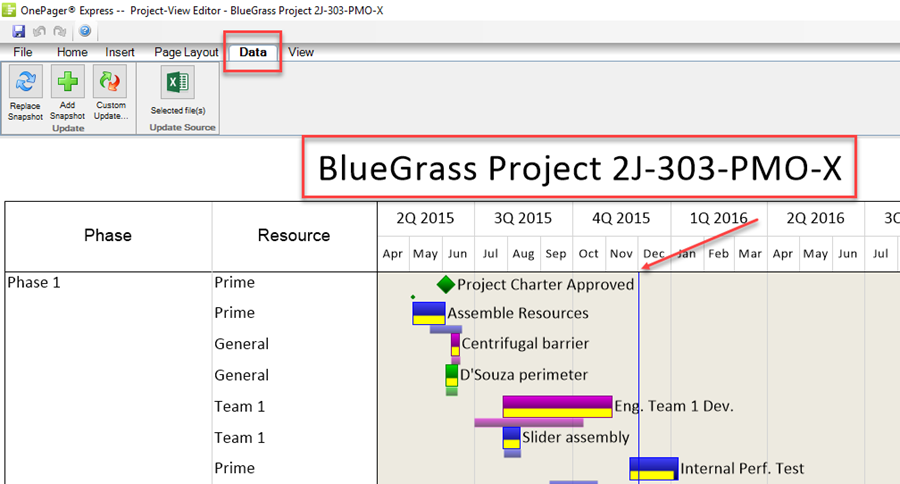 Use the Microsoft Excel Source Plan to Replace a Snapshot

9) For a project view with multiple snapshots it is important to make sure that you have selected the correct snapshot to display in the PVE window before clicking the Replace Snapshot button. OnePager knows which snapshot is being displayed and replaces the visible snapshot with data from the parent Microsoft Excel source plan. Navigating between snapshots in a multiple snapshot project view can be done prior to the above action by using the View tab on the ribbon as shown here:

10) The replaced snapshot for project view BlueGrass 2J-303-PMO-X is shown below: 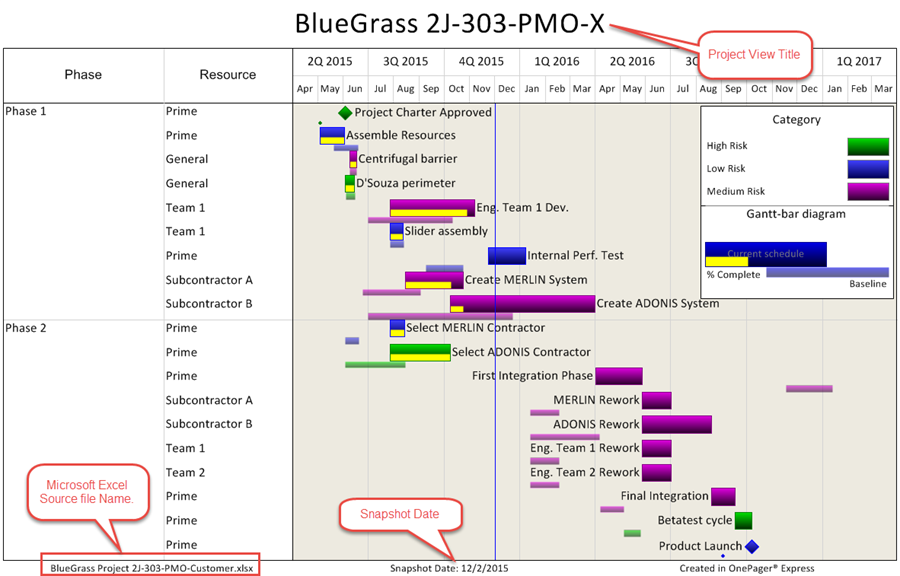 11) Since we are using the OPX desktop application for this example, it was not necessary to launch Microsoft Excel first. As long as you’ve properly prepared your Microsoft Excel source plan just launching OPX from the desktop icon is basically all that is necessary to utilize the new pull operation.

13) There are two ways of updating the second project view from the same Microsoft Excel source plan:

(1) After saving the first project view, close the OPX desktop application and repeat the above process but using Show It2 to select the tasks.

(2) Remain in the current OPX desktop application window and update the second project view from there.

14) Here we demonstrates the second method as it is more efficient. 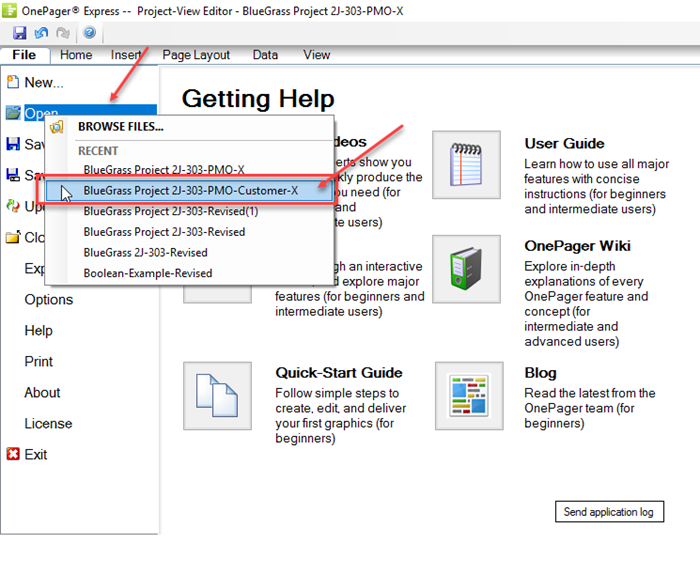 16) When you click the desired project view name as shown above, OnePager displays that project view in a separate PVE window as shown here: 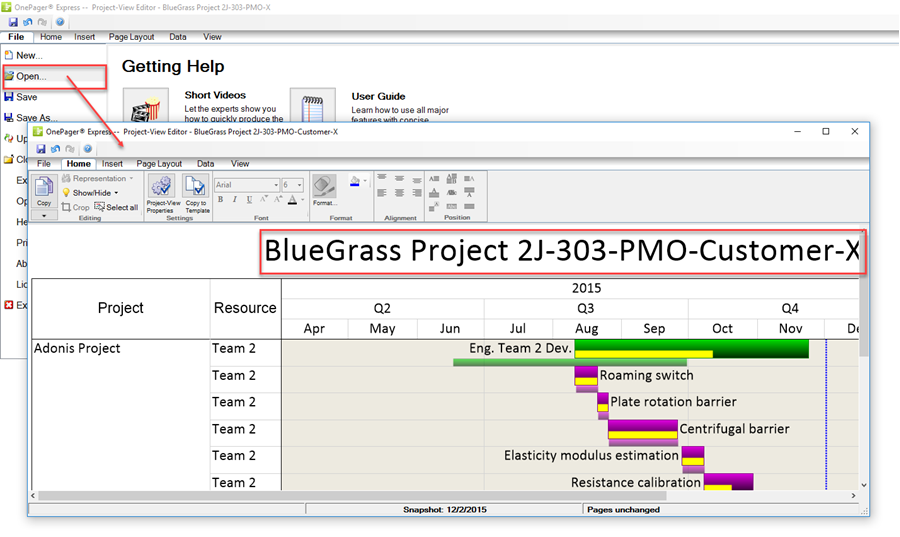 17) You can expand this PVE window. Now, navigate to the “Data” tab on the ribbon as shown below:

18) Clicking the Replace Snapshot button on the Data tab tells OPX to go to the parent Microsoft Excel source plan for this project view, perform the snapshot replacement under the control of the Show It2 field of the plan, and display the results in the current PVE window. 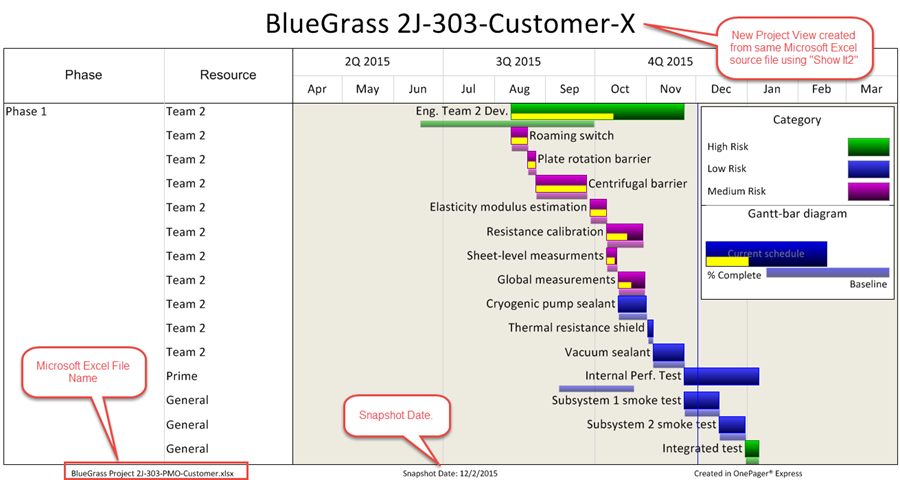 21) Once you are satisfied with your project views you can save them, copy them into Microsoft PowerPoint presentations, or share time in other ways.