Understanding Charts and Snapshots for OnePager for Version 7.1

The concepts described and used in this article apply equally to OnePager Pro, OnePager Express and OnePager Bundle.

About Charts and Snapshots for OnePager

OnePager charts and snapshots let you create schedule charts for specific audiences and show them how the project is changing over time. Each chart is a subset of the tasks in a source plan (e.g., Microsoft Project, Microsoft Excel, Smartsheet, or Oracle Primavera P6) that you specified with a Flag field.

For each chart, you can import different versions of its schedule to keep track of how those tasks and milestones change over time. You can store each version of the schedule as a separate snapshot and give it a unique snapshot date in the past, present, or future. Each chart saves your presentation colors, row and swimlane assignments, font sizes, titles, and legends so that you don't need to re-edit the graphics every time the project changes.

A simple relationship between a source plan (Project A), charts created from that Microsoft Project source plan, for example, using different Flag settings, and snapshots is shown below:

Using a Single Source Plan throughout a Project Period

The following discussion, based on the figure above, assumes that you have one source plan, with a single plan name (Project A), that is used to manage the project. This one source plan is updated periodically, say, from week to week, and re-saved using the same source plan name (Project A) from the beginning to the project's end. This being the first example scenario, the figure above shows the single source plan from which three charts were created using different Flag fields, Flag20 for executive views, Flag10 for project team view, and Flag5 for customer views.

Further, for the Flag20 chart, there exist three snapshots taken from the source plan on June 1st, July 1st, and August 1st. Each snapshot represents the chart (under the control of Flag20 in this case) at each of these three dates during the course of the project. The same dates or different dates are used to create snapshots, in the example, for all three charts associated with Project A. This doesn’t need to be the case because snapshots can be taken at any time for any Flag field available and OnePager remembers them, makes them available for subsequent viewing, and allows updates as needed.

A chart is a set of task bars and milestone symbols for an intended audience. Usually a chart is associated with a specific Flag or Number field in a specifically named source plan. The chart also saves the task bar names, task bar label positions, and row and swimlane assignments, plus the title, legend, header/footer elements, and background colors. This means you never have to re-enter this graphical information when dates change. Making and updating charts is the primary activity that OnePager users do!

A snapshot is a how the task bars and milestone symbols in a chart look as task bars and milestone symbols on a specific snapshot date (a.k.a. status date or version date). When you import updated schedules from a source plan, you must specify a unique snapshot date for the imported data unless you want to replace the data for an existing snapshot. What changes snapshot to snapshot depends on what changed in the source plan. Typically snapshots vary because of changes to start and finish dates, baseline start and finish dates, percent complete and milestone completions.

Another typical project schedule source plan management scenario is to create a source plan at the beginning of a project and save the updated source plan with a unique source plan name after each update/status recording period. Under this scenario, charts and snapshots can still be created and maintained as with the first scenario above.

The following steps correspond with the example in the figure below:

1) Create the source plan named Project A-June 1st with populated Flag fields Flag20, Flag10 and Flag5 and save it.

2) Launch OnePager using each of the Flag fields to control the task selection and 'save the corresponding charts. In the first launch on June 1st, the snapshot dates is set to June 1st.

3) On the next update of the source plan, save the update source plan as Project A-July 20th.

4) Launch OnePager in UPDATE existing Chart mode selecting the appropriate chart name. Set the snapshot date for the date of the snapshot (e.g., July 20th) and create the snapshot.

5) OnePager stores the snapshot for July 20th with the named chart.

6) Repeat this process for each of the two remaining Flag field instances.

After three iterations, there are three charts and nine synchronized snapshots available for use in presentations. There are three corresponding source plans for the status dates, 6/1/2018 through 8/2/2018. 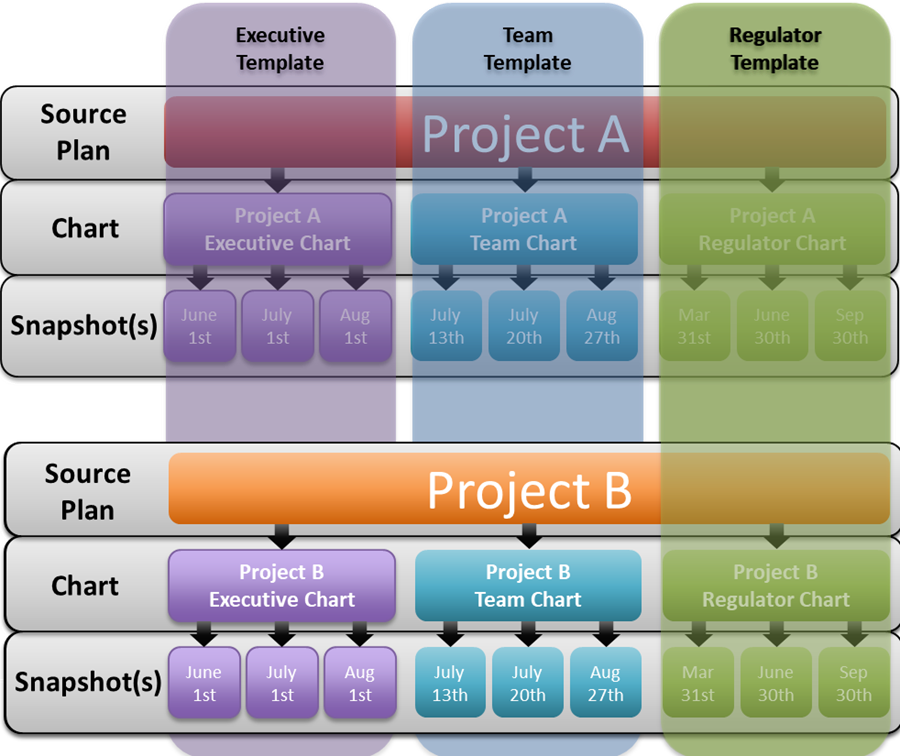