Custom Update (Replacing) of a Snapshot via Pull Operation for Version 7.1

Introduction to the Custom Update Feature in OnePager

This article describes OnePager’s Custom Update feature. Illustrations used in this article are from OnePager Pro using data from Microsoft Project but the feature's function, controls, and manual edits apply equally to other OnePager editions that import from data sources like Microsoft Excel, Smartsheet, and Oracle Primavera P6.

The Custom Update feature let you perform repeated snapshot ADD and snapshot REPLACE operations on an open chart. Illustrations used in this article are from OnePager Pro but the feature's function, controls, and manual edits apply equally to OnePager Express.

The example below illustrates a custom update.

The Custom Update… feature provides you more flexibility when doing a snapshot replacement. Instead of automatically updating the snapshot in the Chart Editor by Pulling in the updated Microsoft Project source plan, OnePager presents you with the standard OnePager choices (OPC) form from which you can either confirm settings or change snapshot settings as needed. For this example, let’s suppose you have a Microsoft Project source plan for which you have already created a snapshot for a particular date, say, 8/1/2019. However, you receive updated information later that day that updates your source plan. You now want to update the chart’s snapshot for 8/1/2019 to reflect the new information.

First, update the Microsoft Project source plan with the updated data you want to replace in the snapshot. Launch OPP Add-in and when the OnePager Pro Start form appears, click the OPEN button which, in our example, provides a dropdown menu with the name of the chart you wish to update by replacement. In this case it’s BlueGrass Project Plan Report -Pro - PMO as shown below: 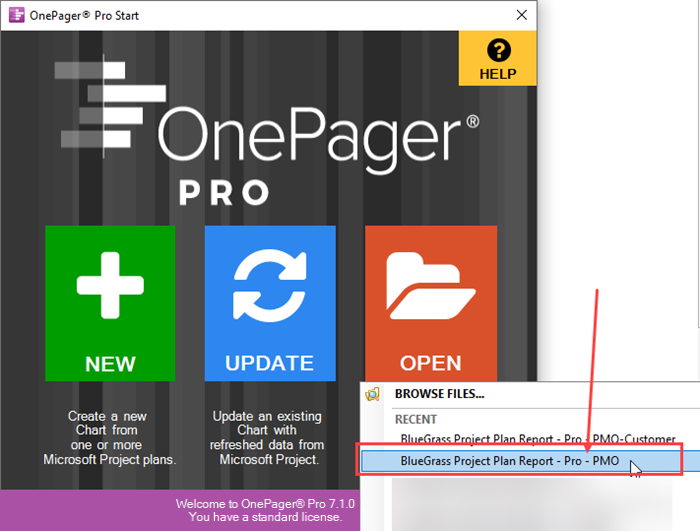 The OPP Add-in application places the selected chart in the Chart Editor. This is the chart and snapshot we want to replace. To proceed with the replacement click the OnePager Data ribbon tool bar tab. The Chart Editor looks like this: 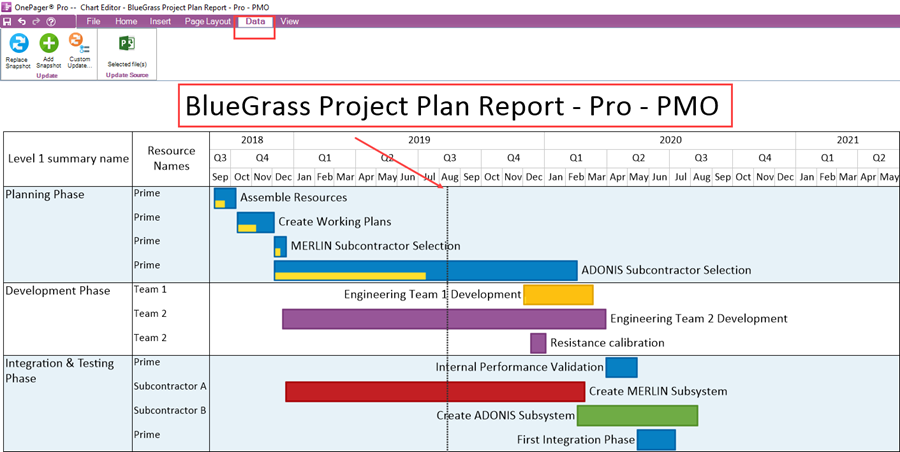 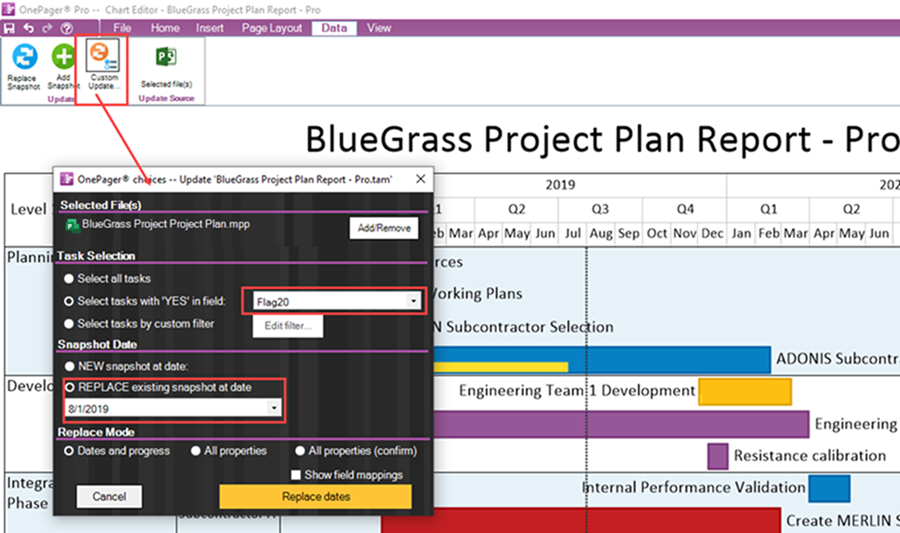 Taking this action accesses the OPC form as shown above. Note that the OPC form is set up to use the Flag20 field for task selection, to do a replacement of the snapshot taken at 8/1/2019, and to replace and progress. For this example, we want the Task Selection control to use Flag20. When you make these changes the OPC form looks like this: 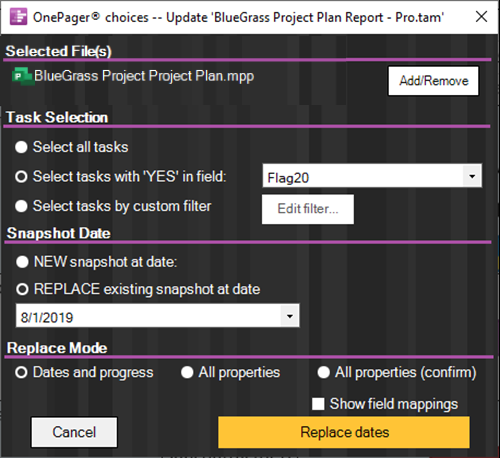 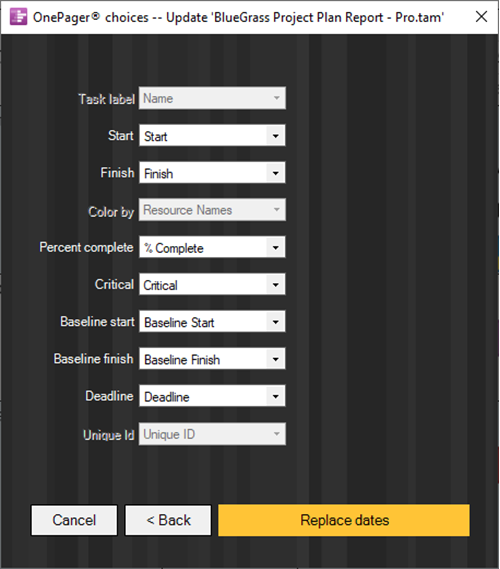 For chart with multiple snapshots it is important to make sure that you have selected the correct snapshot to display in the Chart Editor before clicking the Custom Update… button. OnePager knows which snapshot is being displayed and replaces the visible snapshot with data from the parent Microsoft Project source plan. Navigating between snapshots in a multiple snapshot chart can be done prior to the above action by using the OnePager View ribbon tool bar tab as shown here:

The replaced snapshot for the Custom Update… settings given above are a chart BlueGrass Project Plan Report - Pro - PMO for 8/1/2019 is shown below: 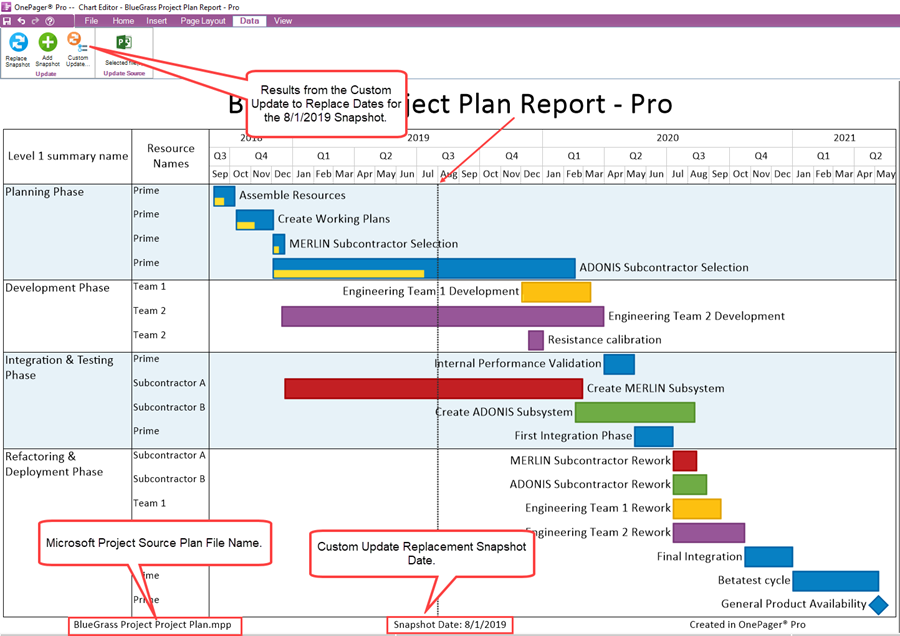 Preparing a Second Chart for a Custom Update

There are two (2) ways of updating the second chart from the same Microsoft Project source plan:

1) After saving the first chart, close the OPP Add-in application and repeat the above process by opening the second chart and then using Flag10 to select the tasks.

2) Remain in the current OPP Add-in Chart Editor and update the second chart from there.

Since the methodology for preparing a second chart is demonstrated in another snapshot replacement article in this series we'll dispense with the demonstration here.

Please see this article for more information: REPLACING a Snapshot via Pull Operation

Once you are satisfied with your charts you can save them, copy them into Microsoft PowerPoint presentations, or share time in other ways. The Pull operation using the Custom Update… feature is an easy, fast, and flexible way to create multiple charts.