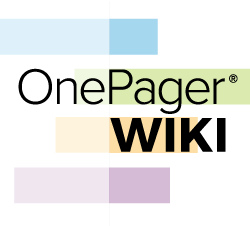 Welcome to the OnePager Wiki. The purpose of this Wiki is to provide a complete reference on the features, functions, and use of OnePager project reporting software. The search box above is the fastest way to find what you are looking for. However, you can also browse articles based on the version of OnePager you are running:

There are three editions of OnePager:

There are some differences between the three editions with respect to:

As a convenience, where there are significant differences between the different editions, we’ve included edition-specific documentation to avoid confusion.

Once launched, OnePager (any edition) functions in a very similar fashion, regardless of whether it was initially launched as an Add-in or Standalone. However, in cases where differences between the two launch methods do exist, we have included specific documentation of those differences.