Collecting, Formatting, and Sorting Task/Milestones into Rows for Version 7.1

OnePager can create Gantt charts or Timeline layout charts by collecting tasks from your source plans and placing them into rows in your OnePager charts. A Gantt chart, in this context, is organized such that each row contains only one task. A Timeline layout, on the other hand, can have multiple tasks in a single row, based upon a field that you specify from your source plan. In a timeline layout, tasks that share the same value for a given field will automatically appear together in the same row.

The Gantt chart and Timeline layout chart shown below are examples of each chart layout organization: 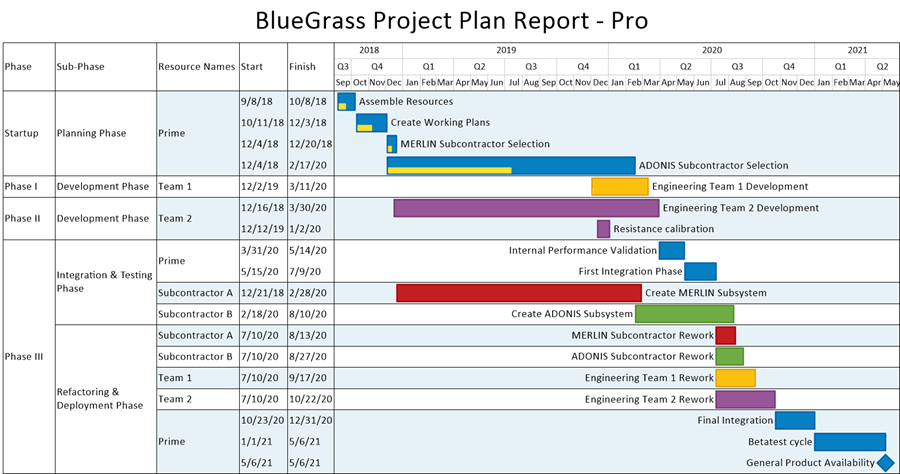 The visual characteristic of the Gantt chart above is that all tasks are placed in their own individual row.

Both chart layout organizations have uses in supporting schedule conversations and the controls and examples provided in this article for managing rows are here to help you implement your choices. Typically, when building a source plan you have a mental picture of how the source plan should look when presented visually. Accordingly, we find that users structure their source plans initially with the intent of creating either a Gantt chart or a Timeline Layout chart. OnePager is structured to support the creation, formatting, and editing of both the Gantt charts and Timeline Layout charts.

This series of articles assumes that the reader is interested in creating, formatting, and editing either a Gantt chart or Timeline Layout chart for a specific purpose and can consult the appropriate sub-section of this article when considering the controls available in the Chart Properties form’s Rows/Swimlanes tab’s Rows control group.

The Chart Properties form’s Rows/Swimlanes tab are essentially the same for all editions of OnePager . The controls described in this article and the remainder in the series applies to Microsoft Project, Microsoft Excel, Oracle Primavera P6, and Smartsheet imported source plans. Where there are differences between source plans, there is a separate article covering specifically the requirements for using the features.

In this and following sub-sections, it is assumed that you have created or are using a distributed Template Properties form that supports either the Gantt chart or Timeline layout chart. Accordingly, this article and the others articles that make up this series deals with creating and editing charts with the assumption that an appropriate Template Properties form is selected as the starting point. The Gantt chart is the most typical task bar/milestone symbol organization used in general practice.

The Chart Properties form’s Rows/Swimlanes tab is shown below with the Rows control group highlighted for the discussion that follows: 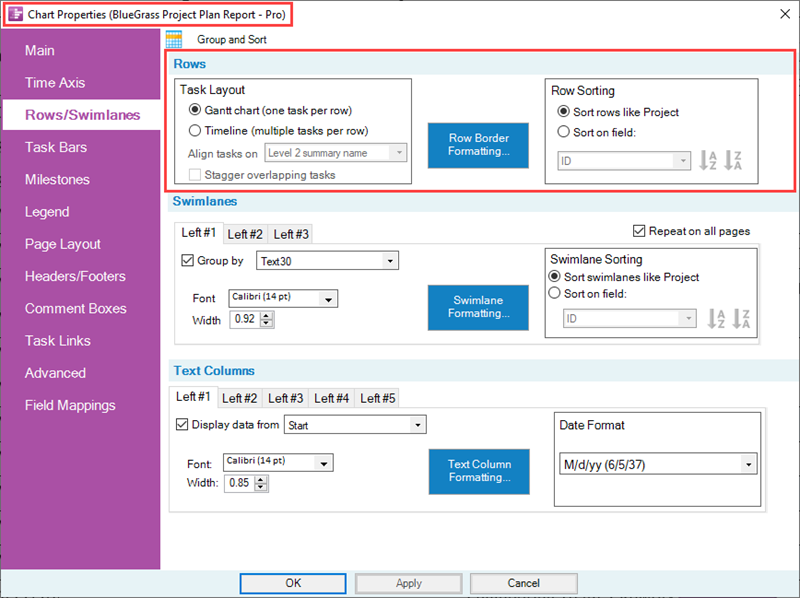 In the illustration above, the Gantt chart (one task per row) radio button is selected indicating that the chart is intended to be a Gantt chart with one task bar/milestone symbol per row. With this decision made, the next step is to determine how imported source plan tasks/milestones and their rows are sorted in the chart.

There are two options available to provide maximum flexibility:

2) Sort on field: where you have the further option to select the source plan field to control the sorting of rows and controls to determine which direction (lowest to highest or highest to lowest) the sort on rows is done.

4) Smartsheet provides the data for OnePager Bundle Standalone to create the SmartsheetTaskID field which individually and uniquely identify Smartsheet tasks/milestones imported into OnePager.

For more information on the controls for managing multiple swimlane levels, please see the article at: Creating, Formatting, and Sorting Swimlanes Levels

The organization of the chart in terms of sorting rows is more visible when the Sort on field: option is used as discussed next.

The most basic Gantt chart with no text columns and no swimlanes looks like this: 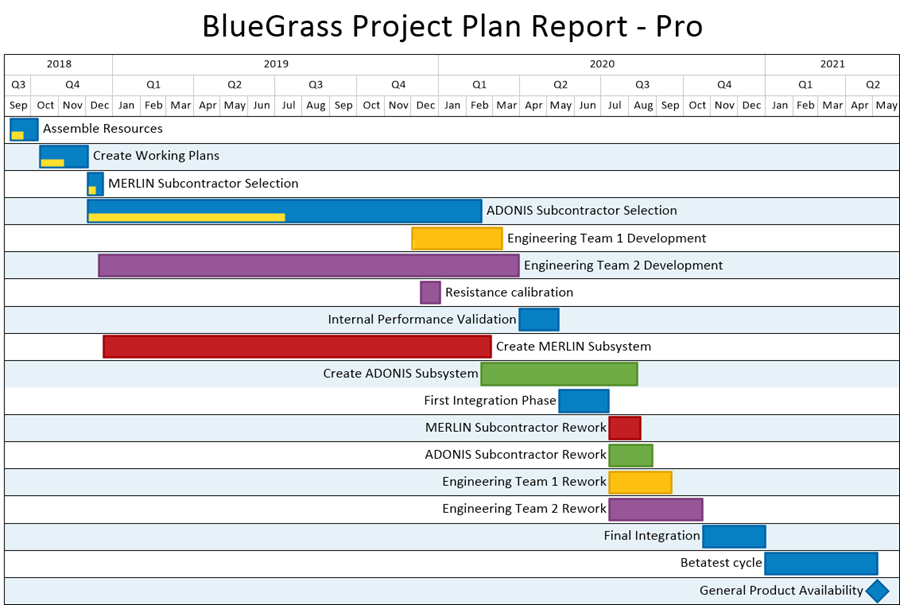 The chart above provides the most basic project information by displaying the task bar name labels and the time axis so that task bar start/finish dates can be seen. Adding swimlanes and informative text columns can enhance the information content of the chart and help focus an audience’s attention to the specific issues of the schedule presentation.

When the Sort on field: radio button is clicked, the window below the radio button and the two directional buttons are enabled. The default setting for Microsoft Project source plans is the ID field.

1) Accordingly, we recommend to OnePager Express users that you add a sequential numeric field to your Microsoft Excel source plans specifically for this purpose.

When the Sort on field radio button is clicked, the enabled sub-control groups looks like this with the window’s dropdown selected: 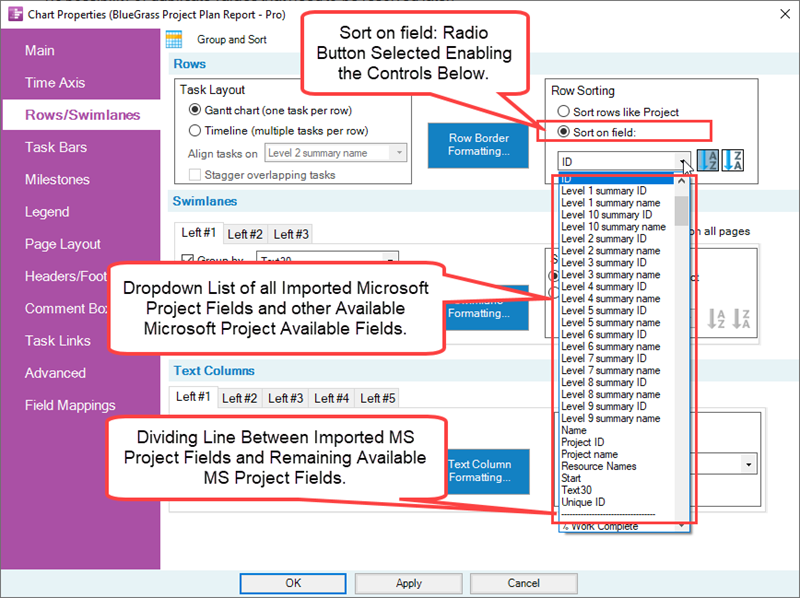 The dropdown list shown above is divided into two parts with the fields above the dotted line being those source plan fields specifically imported into OnePager because these fields are mentioned as settings in the Chart Properties form. Below the dotted line, you have the option to scroll down and select any other of the remaining source plan fields to which OnePager has access.

To the immediate right of the dropdown window are two directional buttons that specify the direction of the Sort on field: operation: (1) Top to Bottom (Lowest to Highest) – A to Z or (2) Bottom to Top (Highest to Lowest) – Z to A as shown below: 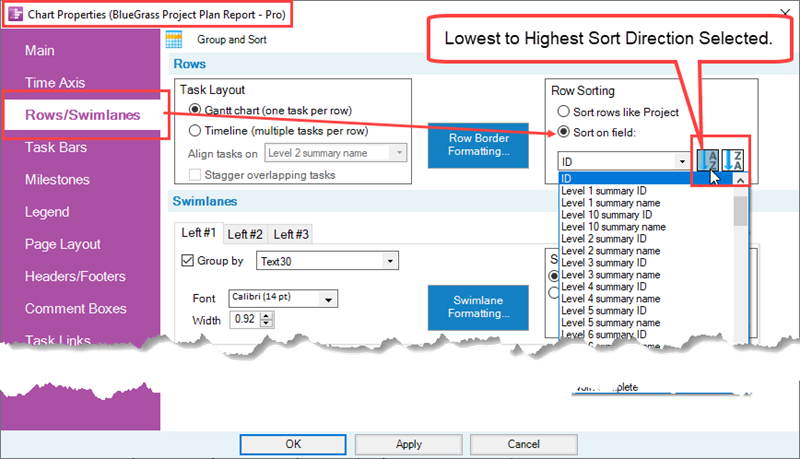 For more information on the controls for managing multiple swimlane levels, please see the article at: Creating, Formatting, and Sorting Swimlanes Levels

As a first example, there are no swimlane levels in the chart below with the three text columns showing:

Since there are no swimlane levels defined, all task bars/milestone symbols are considered in total as the basis of the Sort on field: option using the source plan’s ID field sorted from lowest to highest.

As a second example, we can reverse the sort order by clicking on the right-most directional button (Bottom to Top – Highest to Lowest). When this is done, the chart looks like this after the sort is complete:

For a third example, suppose we add a swimlane level and leave the third text column – ID to compare with previous sort operations. When we add the Level 1 summary name as the swimlane, Sort rows on field: ID in Ascending Order (Lowest to Highest), and make sure that the sort for the Level 1 summary name swimlane is Sort swimlanes like Project the result is shown here:

For the last example, we can reverse the sort direction for the rows to descending order (highest to lowest), and with all other settings remaining the same, the chart looks like this:

Summary for Sort on Field:

Timeline layout charts are useful where the purpose is to track progress from milestone to milestone for many activities that are homogeneous and underway simultaneously. For example, the two illustrations below are examples of Timeline layout charts where the first organizes source plan tasks into projects and the second organizes multiple projects (shown as task bars) into programs: 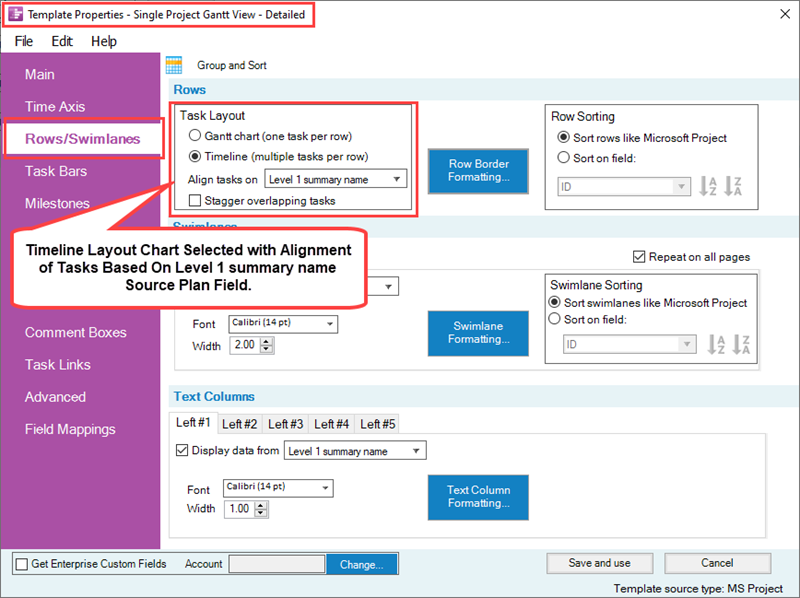 The Align task on window is provided as a dropdown list of source plan field names from which you can select the source plans task’s property or variable upon which OnePager creates the rows with the multiple task bars that appear in the Timeline layout chart.

Where source plan tasks have start/finish dates that result in OnePager rendering them as overlapping in their assigned rows, you can remedy this by checking the Stagger overlapping tasks checkbox ON.

As mentioned earlier, a Timeline layout chart has a specific purpose; one of which is to show milestone symbols on a timeline reflecting a chart being discussed at a high level. The Microsoft Project source plan shown below shows task bars at the Level 1 summary name level and milestone symbols at the level below: 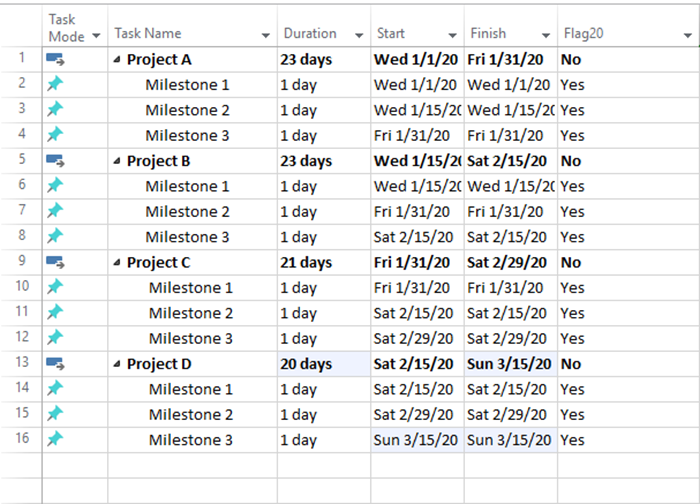 Using a “Birds on a Wire” configured Template Properties form such as the one shown above with the Timeline radio button clicked in the Rows/Swimlanes tab’s Rows control group, we create the Timeline layout chart shown here: 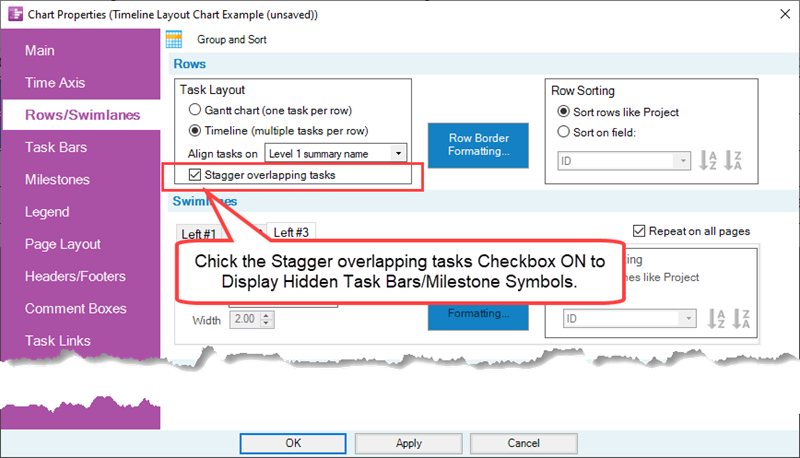 Clicking the Stagger overlapping tasks checkbox to ON changes the Timeline layout chart to look like this:

Of course, there is some editing that can be done to place the milestone symbols in the above chart back over the summary task bars.

At this point it would be a simple matter to uncheck the Stagger overlapping task checkbox to OFF to put all the milestone symbols back into the same row as the summary task bars.

At the completion of the above operation, go back to the Chart Properties form’s Rows/Swimlanes tab’s Rows control group and uncheck the Stagger overlapping task checkbox OFF. After a few editing steps to take care of the task bar name label collisions, the results are shown below:

Links to Other Information on Timeline Layout Charts

For more information on Timeline Layout Charts, please use the links below: 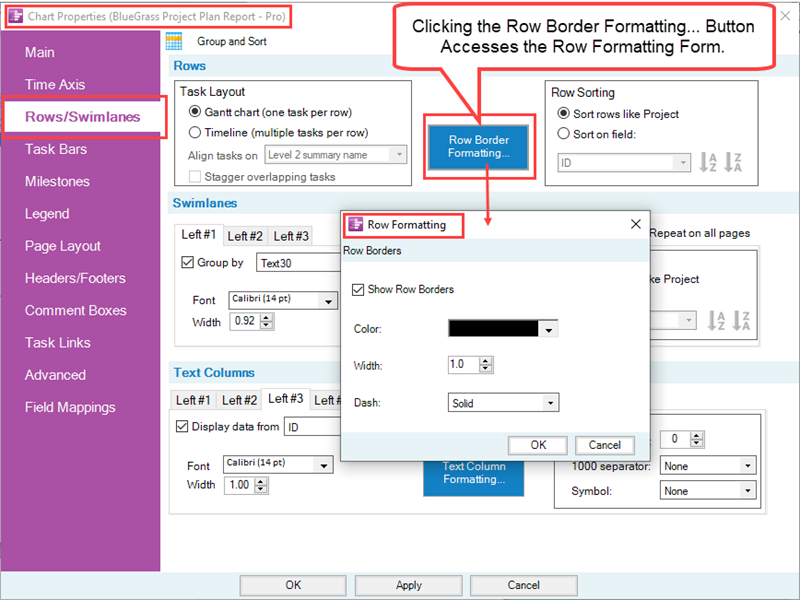 Row formatting consists only of formatting borders for rows globally in the chart. In order for row borders to show in the chart and graph, the Show Row Borders checkbox must be checked ON. When the Show Row Borders checkbox is checked ON, the Color, Width, and Dash: controls are enabled. Click the Color dropdown button accesses the standard Color Chooser form where you can select the line color for the row border. The Width dial control lets you set the width of the row border’s line in terms of the selected standard measure (centimeters or inches). Finally, the Dash: dropdown has five (5) line dash types to select from including Solid, Dot, Dash, Dash dot, and Dash dot dot.

Since row borders can be shared with swimlane level borders, the subject of managing these two border types in the chart is the subject of a separate article located at this link: Row and Swimlane Borders

How to: Build a Project Timeline from Microsoft Project Using OnePager Pro

How to: Make a Timeline with Swimlanes Using Data from Microsoft Project