A curtain is a vertical strip that marks a period of time across all rows. The example below shows a curtain entitled “Quiet Period” that appears from 12/1/2013 to: 2/1/2014. 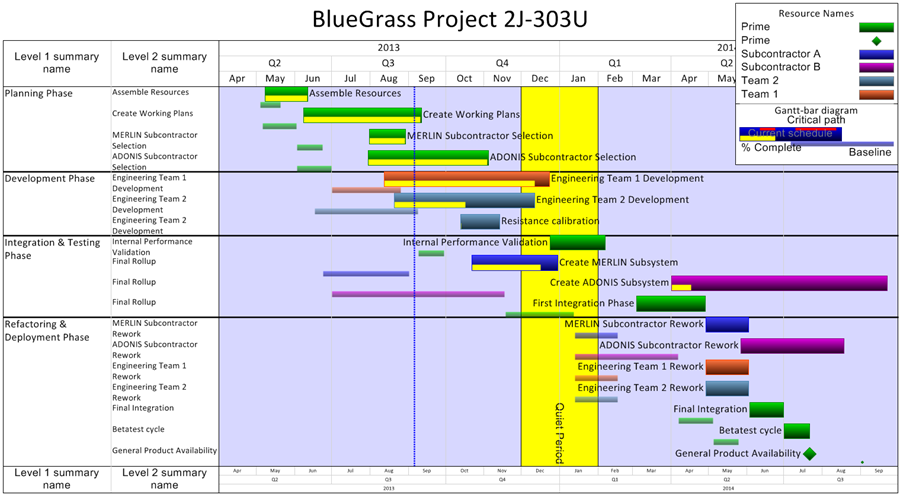 To add a new curtain to a project view, follow the steps below:

1) Go to the OnePager ”Insert” tab and select the “Curtain…” button as shown below:

2) This brings up “Curtain Properties” form that lets you define the date extent, appearance, and text label for the curtain: 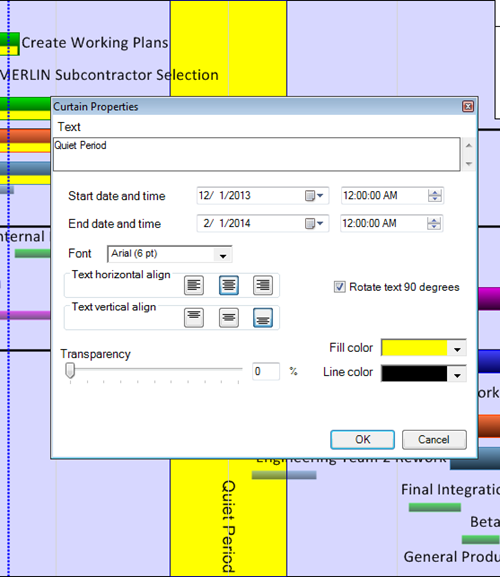 3) Once you have entered the start and end dates, press the “OK” button to place the curtain on the screen.

4) In project views with multiple snapshots, this method of creating a curtain will put the curtain in all snapshots.

Editing a curtain is very similar to editing all the other shapes that appear. Just follow the steps described below:

1) Double-click or right-click the curtain to bring up the “Curtain Properties” form: 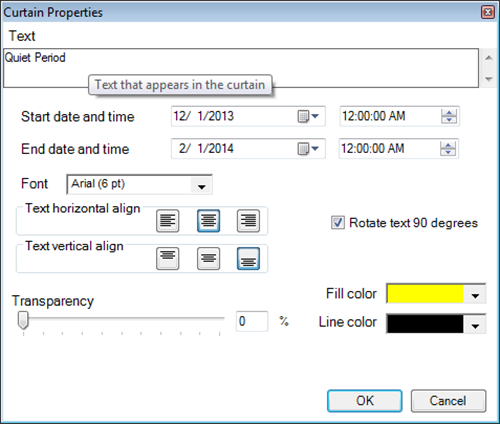 2) The “No Fill” feature applies to curtains. See the previous section on “No Fill” for a description.

3) In project views with multiple snapshots, this method of editing a curtain will change the curtain’s properties in all snapshots where the curtain stil appears.

Deleting curtains is similar to deleting any other shape in your OnePager project view. Just follow the steps below:

1) Right-click the curtain and choose Delete from the context menu:

2) Using the sub-command Delete: From this snapshotwill delete the curtain from the current snapshot. Curtains that remain in other snapshots associated with the project view will still be treated as a single entity with respect to the properties of the curtain.

Curtains may be ordered in the project view from front to back. Just follow the steps below:

1) As shown above, right-clicking on a curtain displays a context menu with several sub-commands including the “Order” sub-command.

2) This sub-command operates in the same way as the “Order” sub-command provided for comment boxes, free boxes, and the legend.

3) When the “Order” sub-command is used, the results with respect to the z-Axis positioning of the curtain will be displayed in all snapshots where the curtain exists.

Also shown above is the “Add another…” sub-command of the context menu displayed by right-clicking on a curtain. Then, follow the steps below:

1) When you click on the “Add another…” sub-command, OnePager will display the “Curtain Properties” form also shown above. Using this form you may configure the additional curtain as required. Click the “OK” button on the form when finished setting the new curtain’s properties.

2) As with all uses of the “Curtain Properties” form, when you click the “OK” button the additional curtain will appear in all snapshots of the project view.

Putting Curtain in All Snapshots

Subsequent project demands may require you to later on put the curtain in all snapshots. To do this, just follow the steps below:

1) An easy way to put a curtain in all snapshots is to use the “Put at all snapshots” sub-command found in the right-click context menu for existing curtains as shown below:

As described above, the width of a curtain in terms of its start and end dates can be edited through the “Curtain Properties” form. To do this follow the steps described below:

1) Changes to the start and end dates for curtains can also be done by curtain grab boxes on the left and right edge to display. You can drag these edges to change the curtain boundaries, as shown below: 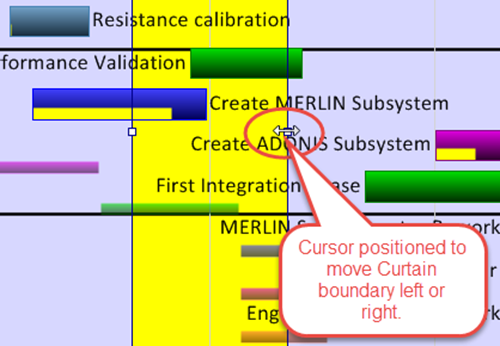 2) Moving the mouse to the left or right will move the curtain’s edge as desired. In the example above, the left edge is moved to the left to increase the width of the curtain: 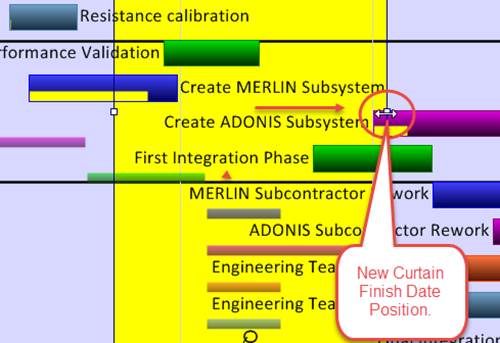 3) Note: You may find it difficult to select a curtain that is very narrow. To select such a curtain we recommend the following:

a) Position the mouse at the bottom of the screen (in the footer area) to the left of the curtain.

b) Hold the left mouse button down and drag the mouse upward and to the right until the lasso completely encloses the curtain.

c) When you release the mouse, the curtain will then be selected.

d) At this point you can widen the curtain by dragging the handlebars to the left or right.