OnePager has date formats for both calendar-year and fiscal-year representations. “Date labels” are represented in standard way for any that has a date association. These include:

Task/milestones and their associated decorations (baselines, deadlines, and endpoints) have their date label characteristics specified globally following the steps outlined below:

a) Select the “Project-View Properties” button on the OnePager “Home” ribbon.

b) This will bring up the “Project-View Properties” form where you may select either the “Task Bar” tab or the “Milestone” tab to gain access to the appropriate “decorations” group of the form as shown below: 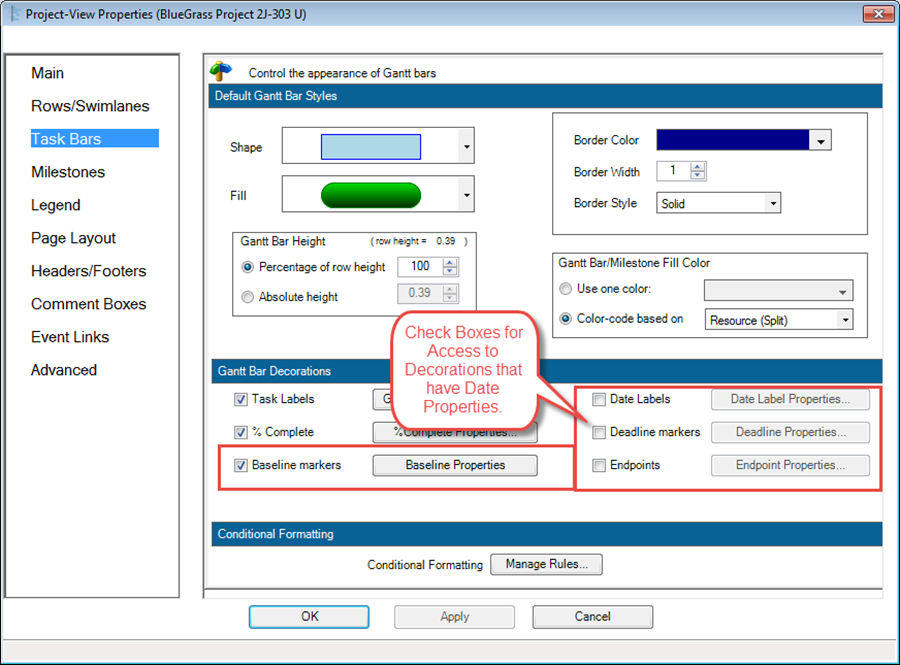 c) When any “decoration” check box is checked, you may click the associated “Properties” buttons to the right to gain access to the respective “Change marker properties” forms as with the example for “Baseline Properties” below: 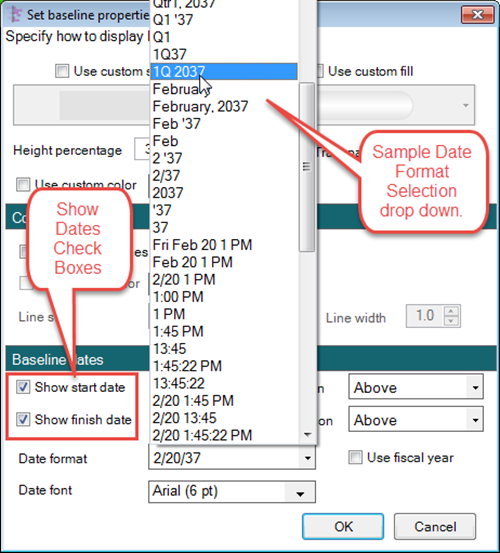 a) As an example, suppose we have the following simple one task project with the single task spanning two standard calendar years. The Microsoft Excel spreadsheet will look like this:

b) Creating the project view will yield this illustration where the time axis is specified globally as a standard calendar year, the single Task’s Start date is shown above the task and its Finish date is shown below: 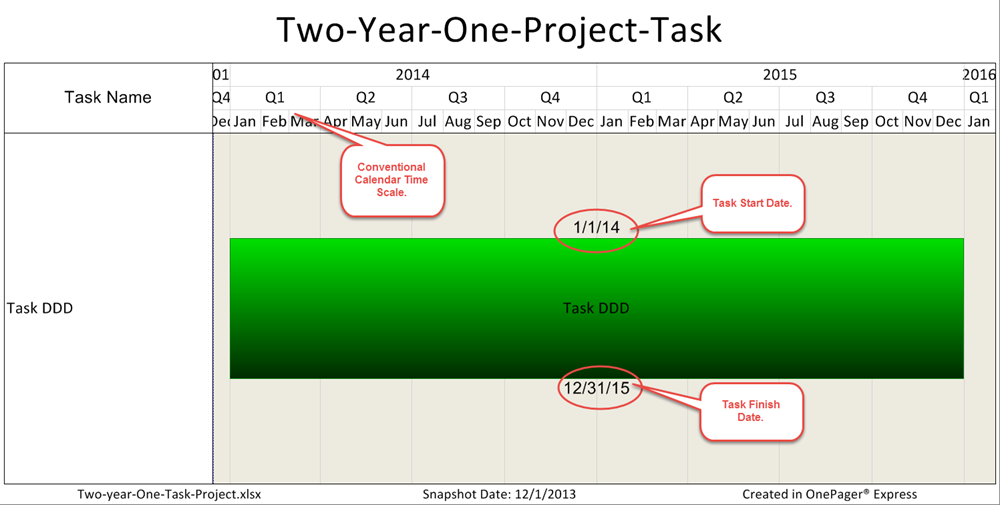 i) The years shown for the Task’s Start date is shown as 2014 and the Task’s Finish date is shown as 2015 above. This matches the time axis specification.
ii) If we now use the time axis controls accessed through the “Main” tab of the “Project-View Properties” form, click the “Configure time axis” button in that tab, and go to the various tabs we can change the time axis to reflect a fiscal year type format with the beginning of the fiscal year in October, let’s say, and the name of the fiscal year will be specified in the calendar year that the fiscal year ENDS. After resetting the “Top”, “Middle” and “Bottom” tabs in the “Advanced time axis features” form to represent the conditions stated above, we can make changes to the “Advanced” tab control as shown below: 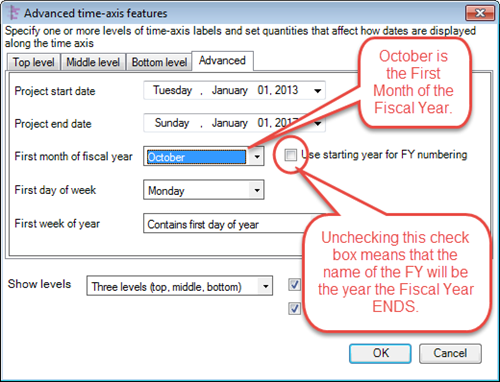 iii) Configured with these time axis control settings, the above project view is transformed to look like this: 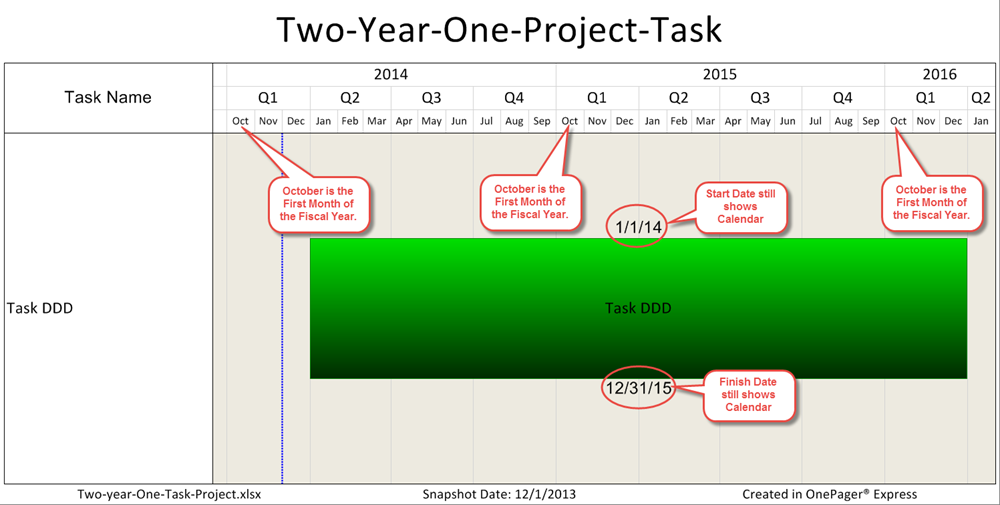 iv) Since we would like to have the Task’s Start and Finish dates to reflect the correct fiscal year designation, we need to make two more adjustments. First, we need to check the “Use fiscal year” check box in the “Set date properties” form accessed through the “Task Bar” tab of the “Properties of the Project View” form and the “Date Label Properties” button to get to the form shown below: 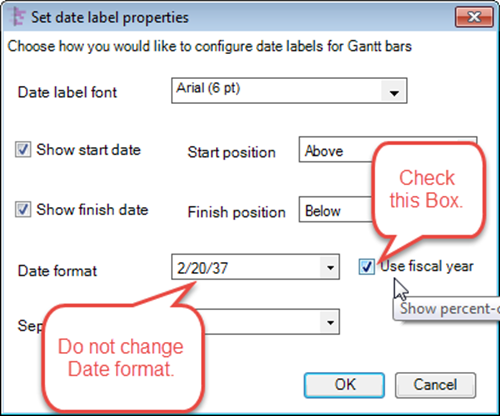 v) In the above illustration, the “Use fiscal year” check box is checked but we have not changed the date format, which is the second change that will have to be made. The second change will look like this: 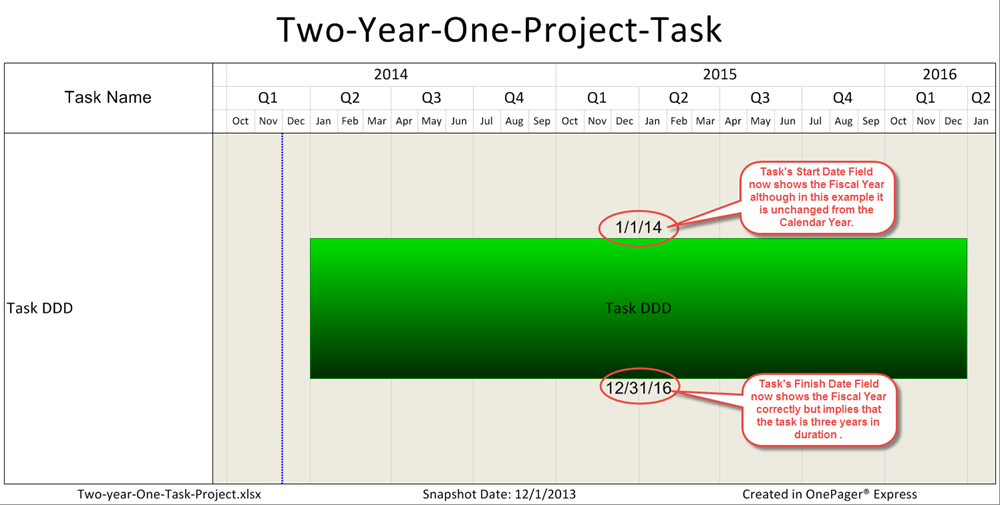 vi) To avoid a possible misunderstanding on the duration of the task in the example above, we recommend, if year must be displayed, that it be displayed in a format clearly showing the fiscal year nature of the Task’s Start and Finish dates as shown below: 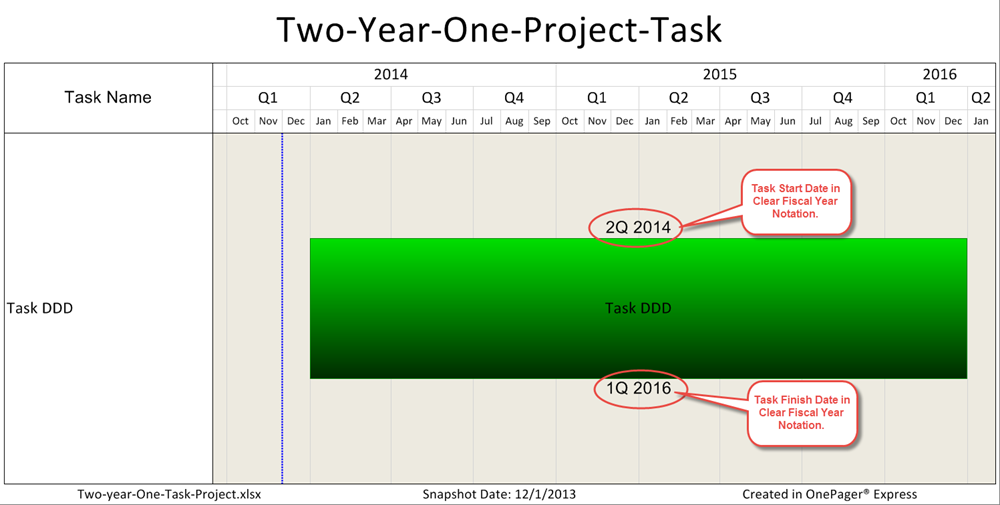 OnePager is able to display the week number of each fiscal year, going sequentially from 1 to 52 (or 53 in some cases). The feature is discussed below and some of the results are shown. This feature depends on your answer to three questions in setting up the time axis:

a) On what day of the week does each week start (Sunday, Monday, etc.)?

b) Which month is the first month of the fiscal year?

The following illustrations define weeks as beginning on Sundays and define the fiscal year as beginning in October. These are the two cases of setting the answer to the third question above to make sure that the feature reflects your desires. The examples show how to answer the three questions via the “Advanced time-axis features” form.

These examples will display all three levels on the OnePager time axis. The top level shows FY and month. The middle level shows week of the fiscal year, the main concern. The bottom level shows day of the week.

Here is how to set up the second level of the time axis to display weeks of the fiscal year. 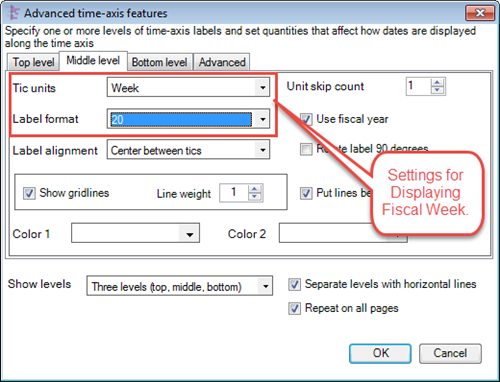 Clearly this example will result in a bottom time axis (days) that are too crowded to be properly displayed. When OnePager detects this condition, it provides a warning message as shown below: 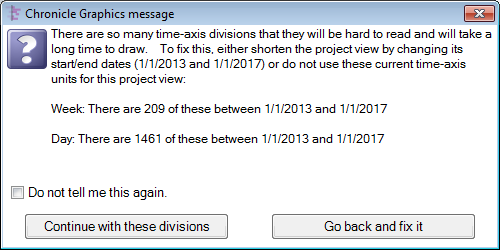 Under such circumstances it is recommended that you adjust your time axis level selections to present a more pleasing display of the time axis. 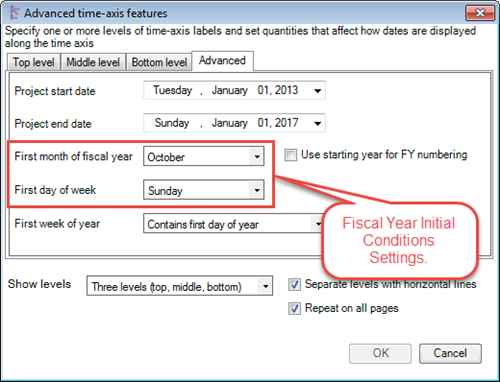 The settings shown below in the “Advanced” tab tell OnePager to count fiscal year weeks from the first full week of each fiscal year. 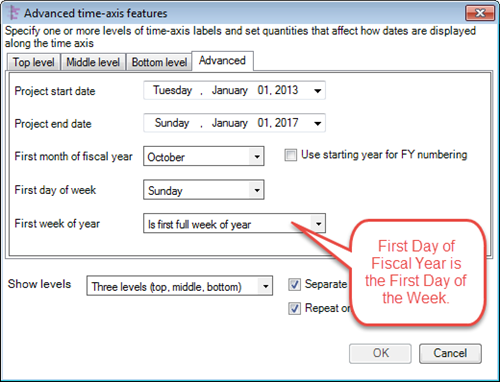